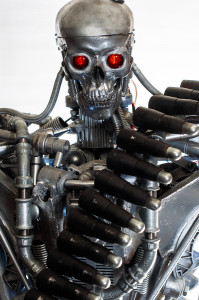 Since they're hitting an AdSense site, we're now serving AdSense only to users with some kind of referrer.

It's interesting also to note that they're not hitting any taxonomy pages that were added since the last attack.

Will they suddenly stop on January 12, 2014 having completed their mission? What is their mission, anyway? The site is otherwise perfectly healthy, and performing well in all channels; there's no hacking (nor even hacking attempts) and as far as I could tell the bots weren't even trying to click on the ads (I just took them off to be safe).  I have read about some Windows viruses that hit particular sites over and over looking for some kind of remote control to tell them what to do next, but I'm pretty sure I don't have any such on this site.

Mostly I have no answers; I am just posting this because I got so many responses and emails about the last attack, I wanted to put this out there to see if anyone else was getting hit again too.