You are here: Home / Effluvia / Lenny

As some of you may know, we lost our yellow lab, Lenny, on February 16, 2012.   My mom wanted to write up a tribute to him, and as she doesn't have a blog or site of her own, I told her I'd post it here.  So I took the picture, she wrote the words.

In July, 2011, at the Huron Valley Shelter, we were introduced to ”Bobby.”  Our Malamute had died in his sleep at 14 years, and I had had in mind another Alaskan-type dog, perhaps a middle-sized young adult.  So of course I came home with a 100-pound-plus yellow lab, already eight years old, with a noble head, a soft cream-colored coat, and big sad brown eyes.  For the eyes or whatever reason, he reminded my daughter of someone named “Lenny”, and “Lenny” he became. 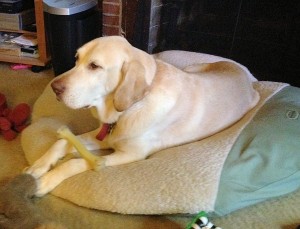 Lenny put that bone there

Wherever Lenny spent his previous years, he had been well fed, well trained, already neutered.  He was very large, and some would say past his prime – not everyone’s candidate for adoption.  But he charmed us with his easy response to basic commands, his mindful, no-nip acceptance of treats, and his amazingly expressive “helicopter” tail.  We’d never before had a shorthaired dog, or one with long soft ears that flopped wildly when he galloped after a ball. But once home, Lenny settled in as if he’d been with us for years and expected to stay forever. The bowls, the toys, the big bed he inherited – all these were immediately his, as we were now his own people. Like our departed Worf, he loved food, treats, walks, other animals, and everyone he ever met.  (Our incumbent – and territorial – cat wasn’t even on his radar.)  He lived for attention and company, and would ask for “cuddles” with a huge but gentle paw to the nearest knee.  His house training was impeccable.  He could bark, but very seldom did, and then only outside the house.  From July through December, we had early walks and long days together, and we expected many more.

In January, 2012, over one or two days, Lenny ‘s eyes became red and swollen, and sensitive to light.  Suspecting nothing more than some infection, we went to see the vet.  But when the doctor beckoned me from the waiting room to a private area, my heart sank even before she said “Lenny is very sick.”  It was lymphoma – cancer of the lymph nodes; treatable in many cases, but not really curable.  It had come on quite suddenly (he’d had a thorough going-over in December).  We had a choice of months of chemotherapy or lifelong Prednizone medication, neither of which carried any guarantees, both with results varying widely.  The initial Prednizone dose had cleared up Lenny’s eyes overnight, so we hoped he would respond similarly to the choice of long-term Pred, along with other meds to moderate side effects.  For a couple of weeks, the swollen nodes did shrink visibly, and we hoped for more time.  After all, Lenny was still alert, ate well, and seemed free of any discomfort.  But his strength was failing: our daily walks went down to twenty minutes, then ten, then just to the back yard.  Now he slept for hours at a time, and then slept some more. We were watching him fade, hard as we tried to look away.

In his last few days, lymphoma swelled  Lenny’s hind legs so pitifully, he could not bend the joints, so that walking, and even standing upright, gave him great difficulty.  At the same time, the Pred made him need to relieve himself every couple of hours around the clock.  Two or three times in the winter night he would somehow get himself silently to my bedroom doorway, and I would somehow wake at the sound of his toenails clicking and his tags gently jingling, and fumble for my robe and slippers.  We would make it out to the deck and down three easy steps (gravity helped).   Coming back up meant hoisting a 100-pound dog by the haunches, but we managed.  And never once – never once – did he make a “mistake” inside the house.

Early on February 16, Lenny was almost helpless, and we began really to face the inevitable. Two of us got him into the car; and for the first time, at the vet, it took two people to help him out again.  He did walk to the exam room, and he lay easily for the vet while I sat on the floor beside him, slipping him some favorite treats.  There was no more remission:  the meds had failed him, the ugly swollen nodes were everywhere, and the vet could offer no further hope.  I heard myself say “I guess it’s time to let him go” before I simply broke down.

While the vet and her assistant went to prepare, I had a few minutes alone with Lenny to stroke him and sing him our silly little private song which just repeated his name over and over, before a sedative put him into a very deep sleep.   With the final injection, Lenny was gone, calmly and quietly, with his beautiful great head in my lap.

Handsome, loving, gallant Lenny was only eight and a half years old when he died; we had had a brief six months to give him family and love and fun, and then scarcely another month just keeping him comfortable, when he deserved so much more.  I cried as hard for Lenny as I did for our dogs who had lived out their rightfully long years. The time Lenny didn’t have is only a fraction of the years he’ll still be a “forever” dog for us.